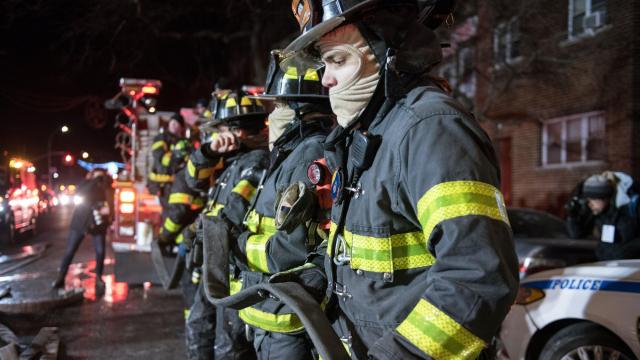 NEW YORK — Even on a nose-numbingly cold morning, families were out on the sidewalks around Prospect Avenue. A mother tugged a beanie over her squiggling son’s ears, and girls ran down the block. They were trailed by a boy towing a wagon filled from a trip to the store, his younger brother wedged in with produce and paper towels.

For as long as brick apartment buildings have loomed over Prospect Avenue, this pocket of the Bronx called Belmont has been dominated by working-class families, many of them drawn from around the world to the promise of New York City.

A century ago, they came from Italy — Belmont was where chandelier makers, tailors and the workers who built the Bronx Zoo, just a block over, raised their children. These days, more of the young people zipping by on scooters or walking to class at the public school around the corner have families with roots in Puerto Rico, Jamaica or West Africa.

When a fire tore through one of the buildings late Thursday, killing 12 people, children were at the heart of the tragedy that has shaken the neighborhood. The fire was started by a 3-year-old boy playing with burners on a stove, authorities said. The youngest victims were 8 months, 2 years and 7 years old.

The inferno, the deadliest in New York in more than 25 years, roared through the brown five-story building at 2363 Prospect Ave. as neighbors cooked dinner and shopkeepers around the corner closed up at the end of the day. Some said they smelled the smoke before they knew anything was wrong, and others said they were tormented by the sight of a firefighter carrying the lifeless body of a child. At least two people remain hospitalized in critical condition, officials said.

“I couldn’t sleep. I can’t sleep,” said Bernadette Miles from her stoop Friday. She had feared the young victims would be children she saw every day playing on the street or wheeling by in strollers. “Those images are burned in my head.”

And when the fire was out, it left a soot-black scar on the heart of a certain type of New York neighborhood, one rarely in the news. This stretch of Prospect Avenue, where there is almost no grass and the buildings vary almost solely by shade of brick, sits between the zoo and the Bronx campus of Fordham University. It is a place known neither for luxuries nor high crime, although a measure of crime and violence persists, and residents complain about landlords who are stingy with heat.

Yet it has manageable rents in a borough, and city, that has become increasingly difficult to afford. The building itself was well kept, records shows, if hardly fancy. For long-term residents, the incentive to stay in Belmont has been a sense of community. They describe finding their own small town within a buzzing metropolis, where neighbors keep an eye on one another’s children or, in a moment of devastation like this one, try to figure out some way to help.

“If you need a dollar, a plate of food,” Maria Pacheco said of her neighbors, “that’s how we are around here: We take care of each other.” It has been nearly a year since an early morning fire pushed Christina Pena and her children out of their apartment a few blocks away, destroying most of their possessions. They relied on friends and neighbors, who gave them clothes, sneakers and bedding. On Friday, she stood across the street from the burned-out building with her son, carrying bags with blankets and socks. “I know what it is to lose everything,” she said.

A Little Italy sign hangs over a nearby intersection, and just a few blocks over, Arthur Avenue draws crowds with its trattorias, delis and bakeries. But there are just as many signs of newness, of a New York neighborhood regenerating itself, fueled by the constant churn of culture and values imported by recent arrivals.

The morning after the fire, the streets around Prospect Avenue still bustled: Residents returned from the laundromat with bags hoisted over their shoulders, women sat in the chairs at a salon, chatting in Spanish, and customers streamed in and out of a botánica filled with beads, statues of saints and the haze from burning incense. Christmas decorations clung to wrought-iron fences and walls on some of the buildings, and on one stoop, a waist-high set of knight’s armor stood beside a front door, a Puerto Rican flag lodged in the helmet.

Even so, the day was anything but normal, as police officers cordoned off the avenue and residents displaced by the fire wandered around with Red Cross blankets draped over their shoulders. A few people made the sign of the cross as they hustled by. One man could not figure out where to leave a small bouquet of flowers, pacing around before setting them down at the end of the block and walking off.

Fernando Batiz stood outside a bodega on the corner, dabbing his eyes.

His sister, Maria Batiz, had lived in the building for about 25 years — likely longer than most of her neighbors, he figured. He described her as a caretaker. She tended to their mother, and let him live with her for months in her tiny apartment when he was at a particularly low point. “She took me off the street,” he said. And on Thursday, she was watching her granddaughter when they were both killed in the fire.

He had just answered a battery of questions from television reporters in English and in Spanish. He stepped aside to catch his breath.

“I don’t know what to think,” he said softly on the sidewalk. “I just saw a picture of her on Facebook and lost it.”

The facade of the building showed few scars of the fire, but the rear was blackened and its windows were blown out.

The 26-unit building was not regarded by city inspectors as problematic; in a statement, the Department of Housing Preservation and Development described it as having a “relatively low history of repair violations.” At the time of the fire, the building had six open violations, a level that did not appear to alarm officials. One fifth-floor apartment had a leaky or defective bathtub faucet and a damaged floor. The building had also failed to post a notice regarding the procedures to be followed for a gas leak. Inspectors examining a broken shower found a first-floor apartment had a faulty smoke and carbon monoxide detector; the fire did not start in that apartment, officials said.

The building has long been owned by a company called D&A Equities. “We are shocked and saddened at the loss of life and injuries which occurred,” the company said in a statement. “Our prayers and thoughts are with the families affected.” The company has owned more than two dozen buildings, and at other properties close by, tenants described the landlord as mostly responsible and responsive. “They answer when you call,” said Maribel Aquino, a receptionist who has lived for nine years in a building a short walk from Prospect Avenue.

Bernardo Nelson, a porter, described a neighborhood that was now in many ways different from the one he had grown up in. “Always drug dealing,” he said, recalling what he saw as a younger man, “a lot of hanging out, a lot of police activity.” But he remembered that 2363 Prospect had been “a clean building in comparison.”

The violence has diminished considerably over the past three decades. The 48th Precinct, which includes Belmont but also neighborhoods heavier with crime, recorded at least eight murders in 2017, according to police statistics. In 2000, by comparison, there were 17.

LaShawn Solomon had reservations when she moved into her apartment on Prospect Avenue about five years ago. She had preconceived ideas about the Bronx, and they were anything but favorable. She encountered something surprisingly different. “You get your, ‘Good mornings,’ your, ‘Hey, how you doings?'” she said. “It’s like a small village.”

Solomon walked up to Miles on her stoop on Friday afternoon.

Miles had been in her apartment cooking when she heard the sirens. She hurried outside without even putting on her coat on a frigid evening. She saw the chaos. She especially remembered the medical examiner vehicles parked on the street.

A day later, she said she had heard that names were released by authorities or were being shared around the neighborhood. She resisted learning them.

“I don’t know who it is,” Miles said before stepping back inside. “I’m not even ready to look.”