'House of Cards' tries making the best of a bad hand 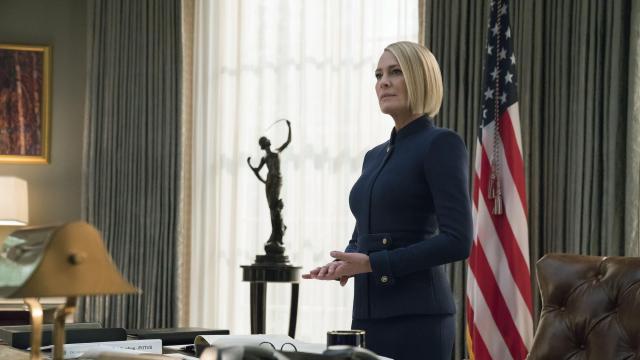 (CNN) — "House of Cards" and "Roseanne" don't have much in common, but their new seasons both faced an unenviable situation -- trying to forge ahead without the central character, whose departure was triggered by off-screen controversy. Dealt that bad hand, the "Cards" writers have responded with a truncated final season -- one that elevates Robin Wright's role her new Commander in Chief status, while still providing a window into the world of bare-knuckled political brawling.

An early gripe about the series was that Kevin Spacey's character, Frank Underwood, always seemed to be playing three-dimensional chess, while everyone else played checkers. Small wonder that his political opponents fell before him, as he broke the fourth wall to eagerly narrate their demise directly to the audience.

Spacey, however, is gone, fired in the wake of allegations of sexual misconduct. That heightens the focus on Underwood's wife, Claire (Wright), who brings a bit more subtlety to the process of governing but proves no less skillful at manipulating those around her.

That's fine, so far as it goes, but only if the foils provide enough resistance to enhance the underlying drama. The new season of "Cards" (five of the eight episodes were previewed) gives Claire ripped-from-the-headlines antagonists, in the form of Koch brothers-type billionaires -- only here, a brother-and-sister tandem, played by Greg Kinnear and Diane Lane. While the star power is impressive, the game they're playing -- too transparently -- feels somewhat less so.

Seeking to account for Frank's absence doesn't exactly feel organic to the storytelling, but it does add some zest to the plot. At the very least, the storyline brings several dramatic possibilities into play, even if it's hard to escape the sense that these devices have been hoisted upon the writing staff, who surely wouldn't have written out Spacey in this way had events not dictated otherwise.

More broadly, the series has always operated within an exaggerated version of politics, wedding echoes of real-world scenarios (a former First Lady ascending to the Oval Office, nefarious Russians and rebellious cabinet members) with the lavish trappings of a classy soap opera. Perhaps that's why news anchors and pundits remain eager to appear in cameos, even if most of them demonstrate that they're more adept at their day jobs than acting.

Wright certainly provides a commanding presence at the center of the maelstrom, again demonstrating a mix of grit and ruthlessness that made Claire every bit Frank's match. Still, Spacey's situation isn't the only off-screen event to intrude on the show's florid imaginings, with the Trump administration having seemingly done all it can to give even the most over-the-top political dramas a run for their money.

As a practical matter, it's easy to see why those associated with "House of Cards" wanted to keep it going, if only to provide this signature series -- which, along with "Orange is the New Black," helped put Netflix on the programming map -- a more satisfying element of closure.

That said, there's no escaping the awkwardness that surrounds permeates this sixth and final season -- an inevitable byproduct of having to shuffle the deck, creatively speaking, after discarding one of its aces.