Chapel Hill, N.C. — More than a dozen groups from across central North Carolina met at the University North Carolina at Chapel Hill on Thursday evening for a rally to continue the nation's conversation about preventing gun violence, ending mass shootings and protecting schools.

"We have had to witness mass shooting after mass shooting. It happened to me, it could happen to you," said one speaker at the rally.

Survivors of the massacre at Marjory Stoneman Douglas High School were joined by students from Duke University, UNC, North Carolina State University and Elon University. Members of other groups, including Mom's Demand Action, NCGV, Stop Handgun Violence, Young Democrats, The BSM, and the NAACP were also in attendance.

The Valentine's Day shooting changed everything for Jaclyn Corin, a student at Stoneman Douglas. 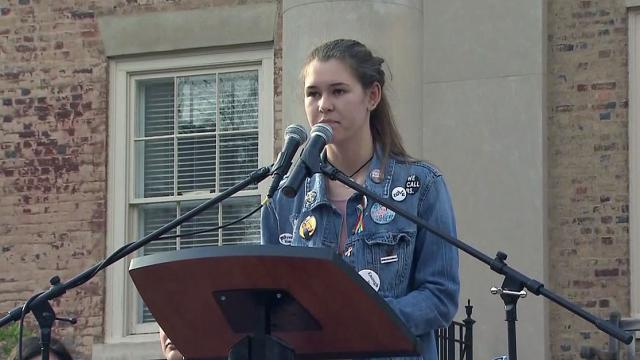 "It took a slap in the face to get involved," she said. "I made it to a room and I was in there for two and half hours until the SWAT team came in."

She now finds herself on the road, speaking at rallies and calling for gun reform.

"The fact that someone can walk right into halls of any of our schools across the nation with a weapon of war that fires over 400 bullets per minute, that can decimate us all, is unacceptable," said UNC student, Joshua Romero. "Let us remind you that we are here for an education, not target practice."

Alli Guttenburg, a UNC student, lost a cousin in the Parkland shooting.

"Jamie's murder is not a national tragedy, but for my family, it is personal and unsettling," Guttenburg said.

Now, Guttenburg said she wants people to turn teh emotion into action, in an effort to change the laws in the country.

"Call them out and vote them out," she said.