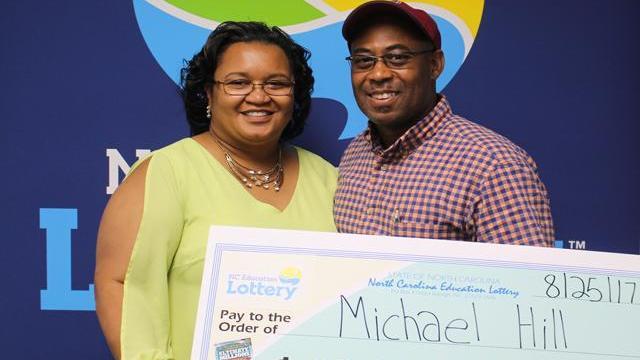 Michael Hill, of Leland, had already played one Extreme Millions scratch-off ticket before he bought a second. He took the first, losing ticket back to the store clerk at the Maco Depot on Maco Road and jokingly asked why she didn't sell him a winner.

So, he tried again.

"I have a strategy when it comes to scratching,” Hill said. “I start with the corners. When I got to the dollar symbol I knew I won something. I saw the one and then the zero and it still didn't hit me. But then I saw the ‘M’. My heart dropped down to my toes and I lost my breath.”

He walked back inside and showed the ticket to the clerk, who informed him he had won the big one. Then, he called his wife.

“I told her to pack her bags, because we just won $10 million," Hill said in a statement from the North Carolina Education Lottery.

Hill claimed the prize Friday at lottery headquarters in Raleigh. He had the choice of taking a $10 million annuity that has 20 payments of $500,000 a year or a lump sum of $6 million. Hill chose the lump sum and, after required state and federal tax withholdings, took home $4,159,101.