‘Head Over Heels’ to Close in January 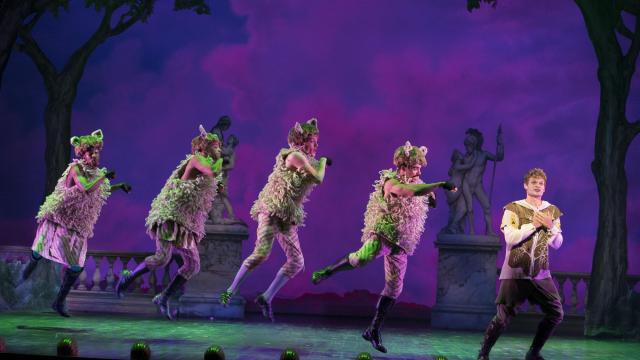 NEW YORK — “Head Over Heels,” the exuberant mash-up of a 16th-century prose poem with songs of the Go-Go’s, will close on Broadway on Jan. 6.

The musical, about a royal family that goes on a wild and wacky journey to escape an oracle’s dire predictions, celebrates love in many forms. It opened July 26 to mixed reviews; in The New York Times, Ben Brantley called it “as timid and awkward as the new kid on the first day of school,” while in New York magazine, Sara Holdren said, “The show is a lot nutso, in the most delightfully daffy, exuberantly heart-open way.”

The show, which began its life at the Oregon Shakespeare Festival and then, after substantial revisions, had a pre-Broadway run at the Curran Theater in San Francisco, never caught on with New York audiences; for a time it was promoted as a Go-Go’s jukebox musical, and when that didn’t work, the show was marketed as a fabulous fairy tale.

It has consistently struggled at the box office — it grossed an underwhelming $348,117 in its first full week of performances and then slid further, grossing $208,221 during the week ending Nov. 25 — and it has remained open largely thanks to the generosity of its producers, who include billionaire Louise Gund, as well as lead producer Christine Russell, film star Gwyneth Paltrow and actor Donovan Leitch, as well as Jujamcyn Theaters President Jordan Roth.

“Head Over Heels” was conceived by Jeff Whitty (“Avenue Q”) and he wrote the original book based on “The Arcadia” by Philip Sidney. Whitty’s script was substantially revised by James Magruder. The Broadway production was directed by Michael Mayer (“Spring Awakening”).

The musical cost up to $14.5 million to capitalize, according to a filing with the Securities and Exchange Commission. The show did not recoup its costs, making it a flop, and that money will be lost.

At the time of its closing, it will have played 188 regular performances and 37 previews at Broadway’s Hudson Theater. Russell said in a statement that the producers will next explore a national tour, regional productions and professional licensing.