Cary, N.C. — A local woman wore her engagement ring without the diamond after it fell out just a few months after her fiancé bought it. The couple says they went back and forth with the company and just wanted a refund, but the retailer pointed to their policy and refused.

Lauren Sharpe still wears the band on her finger while the one carat diamond, with prongs still attached, is completely separated.

“I’ve been wearing the ring with the diamond broken because I’ve been telling people, ‘he went to Jared’s,’” said Sharpe, quoting the jewelry company’s famous slogan.

Sharpe’s fiancé paid $7,675 for the ring from Jared, which bills itself as the Galleria of Jewelry.

“I came into the room because he called me and he’s like, ‘hey, Lauren, you want to get married?’ and I’m like ‘yeah’ and then I realized he was down on one knee and I’m like ‘great, that’s how this happened,” Sharpe said.

Just three months after the proposal, Sharpe noticed that the diamond setting on the ring seemed to be loose. She took it back to be fixed, but four days later, the diamond snapped off.

“It hit me in the chest while I was making some salad. I thought it was a button coming off my dress,” Sharpe said.

Sharpe went back to Jared’s hoping to get the ring fixed.

“They said the way it’s built, it’s going to keep breaking because one part of the diamond prongs is too big for the ring,” Sharpe said.

Not wanting a ring that could constantly break, Sharpe and her fiancé tried to find another ring she’d love just as much. When she didn't find one, she asked for a refund, but ran into a problem with Jared’s return policy.

“A lot of people have quoted me that policy of you had 30 days to change your mind, and every time I hear it I say I never changed my mind. I still love that ring. The problem is that ring’s not going to hold up to real life,” Sharpe said.

Sharpe said she went up the corporate ladder, inquiring with a regional and case manager before contacting the Better Business Bureau. When she still couldn’t get a resolution, she contacted 5 On Your Side, who reached out to the company.

Citing a dedication to “exceptional customer service,” a spokesman told 5 On Your Side they had “come to a resolution with the customer.”

The couple has received a $7,675 refund and bought a new ring with the money. 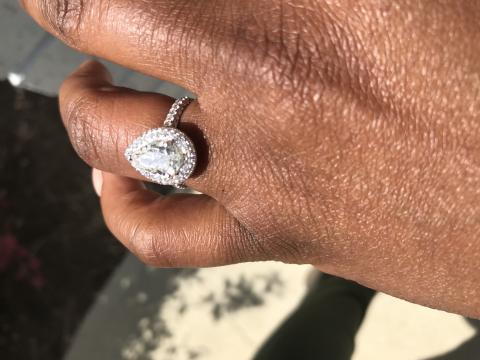 Sharpe noted that Jared employees were always polite in declining a refund, but that didn’t make her feel better about her broken engagement ring.