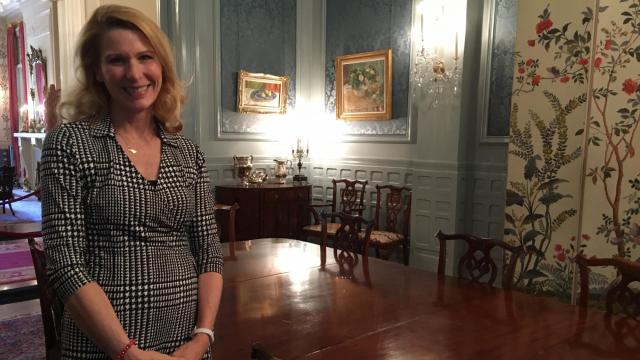 "Every vote counts." Kids often hear that old saying about our electoral process. And, while it's true that every vote is important, anybody who has followed recent presidential elections knows that it's a bit more complicated than that.

The 2008 New York Times bestselling picture book, "Grace for President," by author Kelly S. DiPucchio, tackles that more complex side of our electoral system. It tells the story of a girl named Grace who decides she wants to be president after realizing that no woman has ever held the position. Instead of having each student vote individually, students set up an electoral college. It finally all comes down to the state of Wyoming and its three votes.

This month, Raleigh Little Theatre will bring that story to the stage when it opens a musical version of the book at the N.C. Museum of History. The show opens Friday, Oct. 13.

The stars of the evening will be the teens on stage in the community theater production, but, on opening night, they will share the spotlight with somebody who makes headlines from time to time.

After the premiere, Kristin Cooper, First Lady of North Carolina, will lead a panel discussion on women leaders that features four Wake County girls, who are making a difference in their school and community - Halle Barcus, a 10th grader; Giovanna Evans-Hunter, a fifth grader; Angela Carillo, a 10th grader; and Leeya Chaudhuri, a fifth grader.

The play's main character is a girl, who wants to be president, but Cooper said the production is for everybody.

"There's a lot in it about history and politics and how the system works that a lot of people don't understand," she said during an interview in the Executive Mansion in downtown Raleigh. "And history and civics are subjects that we tend to overlook in school a lot. It's going to be educational for boys and girls. .... It's going to be a really fun show. I'm hoping it will be fun and informative for everyone."

For Cooper, the partnership with Raleigh Little Theater is a natural fit.

She has been a long-time theater mom to her three now young adult daughters, has taken classes through Raleigh Little Theatre and has been a member of a couple of local theater boards, including RLT's. Daughter Natalie, 24, who recently graduated with a degree in dramatic arts from the University of North Carolina at Chapel Hill, helped select "Grace for President" for RLT's 2017-18 youth series.

"My kids all did theater as kids and grew up doing various shows. I sort of got involved through them," she said. "If you've ever had a child in a play, it's six nights a week. And, by the time you're there that much, you might as well pitch in."

Cooper, a lawyer by training, didn't just help out with her kids' activities. She also got involved in local adult theater programs.

"They have a lot of kid classes, but they have some wonderful adult classes that are a great way to spend a couple of hours on a Sunday night," she said.

Theater, she said, is a great experience for kids - especially for those who are drawn to the stage.

At least one of Cooper's daughters is pursuing a career in the arts. Claire, who recently graduated from Carolina with a degree in vocal performance, wants to be an opera singer. But, the experience on stage for all three of her daughters has made it easier to stand in front of a crowd - something they have to do as daughters of a governor.

"They don't love politics, but they do sometimes have to be on stage ... and they are much more comfortable doing that," she said.

The musical version of "Grace for President" premiered here in North Carolina at the Children's Theatre of Charlotte in fall 2016. Raleigh Little Theatre learned about the production - and selected it - last fall before the general election, when it appeared that Hillary Clinton might become the first female president.

"Some of the discussions were whether or not it would be passe by the time it would get to this point," Cooper said. "We thought it had an interesting enough message that it would still play. And, of course, that perception has changed. We're having different conversations than I thought we would be having, but that's great. You learn and adapt."

Faithful to the book

The musical version of "Grace for President" is incredibly faithful to the book, said Patrick Torres, RLT's artistic director. Lines and lyrics come directly from DiPucchio's text. Theater can be a powerful way to tell a story for any audience, especially kids, Torres said.

"In this play in particular, we're hearing from Grace and her journey in the play is interesting," he said. "You see her teacher introduce all of the presidents and she sees them and says, 'What's the problem? Where are the girls?' Just being able to relate to her in that moment and watch her as she decides that if she want to change what she's seeing, she has to do it. She has a responsibility to make a difference."

Torres said his seven-year-old saw a run through the other week with no costumes or props. Yet, he said, "she left singing the songs and with this insight into the voting process and a lot of questions."

Torres added: "It inspired a lot of discussion for us around the dinner table that night about what she had seen and how the process works. I think it's inspiring, but it's also educational. It's a great mix for a family series show."

The show also will feature two other special discussions:

Tickets are on sale now - $15 for adults and $11 for kids ages 12 and under. Raleigh Little Theatre's website has more information.