‘Don’t Run This Year’: The Perils for Republican Women Facing a Flood of Resistance 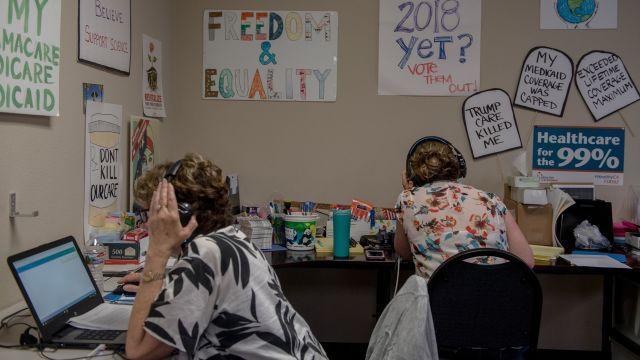 Men just have a different style, she said: “They’re more warrior-oriented. We are a little more consensus-builders.”

But she laughs off the idea of campaigning as a woman. “I want all voters; I like men too,” she said. “I don’t think it helps to talk about gender.”

It may be the year of the woman in midterm campaigns across the country, but Harkey is not embracing it here in one of the nation’s most hotly contested congressional elections. The passion is far more evident 30 miles south of here, in the offices of a new group called Flip the 49th, whose weekly protests after Trump’s inauguration drove the Republican incumbent, Darrell Issa, from his seat. Now, it is working feverishly to elect the male Democrat running against Harkey.

“She’s anti-health care, anti-gun control, anti-family, anti-immigrant, anti-environment,” said Mary Schrader, a Flip volunteer who was a Republican until 2016. “She’s completely out of touch with the women in her district.”

This is the bind for Republican women running for office in the Trump era. The energy among women that started with the marches after the president’s inauguration is against them — surveys have shown that 70 percent of the membership of local resistance groups, and almost all the top leadership, are women. And having long resisted identity politics, Republican women are reluctant or unable to claim any advantage to being a woman among voters.

Republican women running in swing districts are instead left to carefully carve out the separation between themselves and Trump, a president who was elected with the biggest gender gap ever recorded, and who regularly dismisses female officeholders as “crazy” and “low IQ.”

Those running in districts where the president is popular have been punished for so much as criticizing him for incivility.

“We’ve told a lot of women, ‘Don’t run this year,'” said Meghan Milloy, co-founder of Republican Women for Progress, which helps to promote moderate female Republicans. “We’ve told them, ‘You’re a great candidate, if it were any other year you would win.’ We don’t want these women, who have such potential, to lose and get down and get out of politics.”

There is a record number of Democratic women running for the House this year, but Republican women did not break the record they set in 2010 — when the “resistance” energy was on the right. Only about 14 percent of Republican House candidates are women, compared with about a third of Democratic candidates, according to the Center for American Women and Politics at Rutgers.

Rep. Elise Stefanik, R-N.Y., who is leading her party’s recruitment efforts in the House, credits several candidates with keeping the party competitive in districts where Hillary Clinton won in 2016 — Young Kim in Southern California, for example, and Lea Marquez Peterson in Arizona.

Stefanik argued that Republican women connect better to voters. “Democratic women are running in response to the Trump administration,” she said. “With my candidates I’ve worked to recruit, it’s more about representing their communities and their districts.”

In states and districts, though, the party has been slower to support Republican women.

Carla Nelson, running for an open House seat in southern Minnesota, has the endorsement of four national conservative women’s groups, nine incumbent congresswomen and the National Rifle Association. She beat an incumbent Democrat to win her current seat in the state Senate.

But in the primary Tuesday, local party organizations are supporting Jim Hagedorn, who has run for the seat and lost three times, even in 2016 when Trump won the district by 15 points.

“Locally it’s different,” Nelson said. “All the good ol’ boys begged me not to run.” Hagedorn has a trail of blog posts derogating women. He described the nomination of Harriet Miers in 2005 as an attempt “to fill the bra of Supreme Court Justice Sandra Day O’Connor” and in 2008, he thanked Sen. John McCain “on behalf of all red-blooded American men” for his vice-presidential pick — “SARAH’S HOT!” he wrote — leading a columnist for the conservative Washington Examiner to label him in April “the worst midterm candidate in America.”

“The mailers would write themselves,” Nelson said. It was no wonder, she added, that the Republican Party is “struggling to earn the support of women in the voting booth.”

Republican voters may be less inclined to support women: 13 percent of Republican primary winners so far are women, compared with 42 percent among Democrats, according to the Rutgers center.

Nelson sounds like many Democratic women when she describes why she is running in a year when the odds are so against her.

“The need is so great for someone like me who has a track record of getting things done,” she said. “I just can’t sit on the sidelines.” Jenifer Sarver, who ran unsuccessfully in a crowded primary in Texas’ solidly red 21st District, echoed that reasoning. But while Nelson largely aligns with the president, Sarver, a former aide to Sen. Kay Bailey Hutchison, had written about her decision to vote for Clinton over Trump in 2016.

“I sat back and said, ‘Do I want to be somebody on the sidelines throwing rocks or do I want to jump in and make a difference?'” she said. “My message was, ‘I want to stand next to him when he’s delivering conservative policies I agree with but be the first person to call out the incivility I see.'”

She was “blown away,” she said, by the support from many voters. One man, she said, told her, “My New Year’s resolution was to only vote for female candidates.”

But others told her that they could never vote for her because of her vote for Clinton, and her primary opponents pounced on her for saying the Republican Party did not do a good enough job representing women and young people. Consultants told her to “run to the right and equivocate later.”

“That’s what people are disgusted with in politics,” said Sarver, who came in fifth out of 18 candidates in the March primary. “I would rather lose with grace than lie to voters.”

“Republican women have always said we don’t play identity politics,” she said. “How we address that going forward is a really big problem.”

But the biggest problem for Republican women this year is what Harkey told the crowd of 80 people who gathered to open her headquarters on a steamy Saturday in August. “The energy is on the other side,” she said.

“Republicans are going, ‘Are you Trump or are you not Trump?’ ‘Are you this or are you that?'” she said. “You know what? This is no time to worry. Just get out and vote, and vote for the party, people, because the other side has gone way far left and it’s going to continue.”

The district of red-roofed Spanish-style McMansions and oceanside golf courses stretches from southern Orange County to northern San Diego County and includes the Marine base at Camp Pendleton. The crowd cheering Harkey included several veterans and a woman with a sparkling flag pin. A leader of a local Republican women’s club noted proudly that her red dress was from Ivanka Trump’s label.

As Harkey called out to make sure she had not missed any local officials — “School board, water board, anything else?” — a man in the crowd replied, “I’m all for waterboarding!”

Harkey told her story of arriving in California as a young girl from Illinois and having to peel onions with the Mexican bracero workers to earn $11 for her first Barbie doll. She went to community college and the University of California-Irvine, working her way up in banking and to become mayor of Dana Point, a wealthy oceanfront enclave. She served six years in the California Assembly and is now a member of a board that reviews state tax assessments.

After nearly two decades of voting Republican in presidential races, the district went for Clinton by 7 points in 2016. And Pat Bates, a state senator, warned the crowd at Harkey’s headquarters that Democrats had “overperformed” in their voter registration efforts in the June primaries.

“We need boots on the ground,” she said. “Every single Republican has got to vote or we’re looking at a socialist southern Orange County and north San Diego, I kid you not.” The women at the Flip the 49th headquarters, who worked hard for that overperformance, began their activism out of concerns that the Trump administration would dismantle the health care law. They held weekly protests outside the office of Issa, a leading tormentor of President Barack Obama and Clinton, and once brought a cake in the shape of a Hawaiian shirt to encourage him to retire early; they returned to celebrate the next day when he announced he would.

They began calling themselves ReSistas, and by November had joined up with Flip the 49th to rent office space in Carlsbad. A Trump effigy stands in one corner and across the window is a banner reading “We the People” embroidered by Karin Brennan, a former sergeant in Army intelligence who joined the group.

About 200 people showed up — and stayed — for a six-hour training session on how to canvass voters.

In the primaries in June, the group reached 57,000 voters by phone or door-knocks, turning out more Democrats than Republicans in a district that is known as the birthplace of the modern right.

“Eighteen months ago if you asked me my congressional district, I would have said I have to look it up on Google,” said one volunteer, Ellen Montanari.

With so many women running this year, the women here wanted to support a female candidate. But they believe Mike Levin, the Democratic opponent, will support what they see as women’s issues, particularly health care and gun control.

“You can have a female candidate,” said Terra Lawson-Remer, a founder of Flip the 49th. “But you need an army to take power.”

Harkey was endorsed by Issa. “They’re trying to bank on the R next to her name,” said Nikki Faddick, a co-leader for a local chapter of Moms Demand Action, a gun control group.

But Harkey, while a loyal Republican, is aware that she needs to choose her words carefully. “I would like to see the president tweet less and govern a little more,” she said in an interview.

The crowd at her headquarters seemed mostly concerned about unauthorized immigrants who they say take advantage of the system. Harkey returned to her story about the braceros, noting that Mexican workers can come across the border on day passes to work in California’s agricultural industry. Her voice betrayed a tinge of exasperation.

“If the president wants his wall, he needs his wall,” Harkey told them. “Just do it, you know? It’s not that big a deal.”