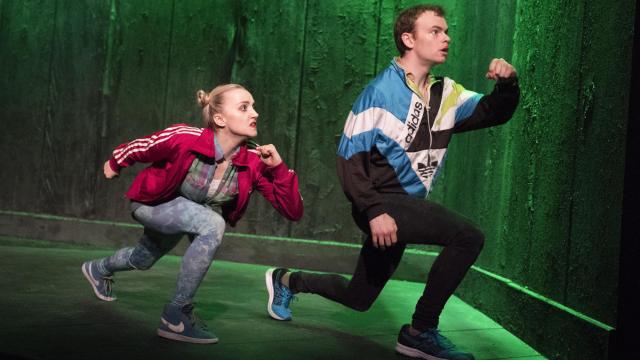 NEW YORK — Oh, the horror and the glory of being 17. That’s the age of the title characters of Enda Walsh’s “Disco Pigs,” which opened in a harrowing, exhilarating revival Tuesday night at the Irish Repertory Theater.

Anyone who remembers the agonies and ecstasies of late adolescence is sure to feel a shudder of recognition — part nostalgia, part revulsion — watching this propulsive Irish drama from the mid-1990s. Be warned: You may find yourself unsteady on your feet, with a vicious vicarious hangover, when its mayhem has come to an end.

That’s because this portrait of two best friends on the crumbling cusp of adulthood, directed by John Haidar, is driven by a concentrated fuel of adrenaline and hormones, mixed with lethal quantities of alcohol. That, and a word-drunk poetry that zigzags between extreme, giddy feelings of power and powerlessness.

Performed by Evanna Lynch and Colin Campbell — a cast of two with the teeming energy of an angry mob — “Disco Pigs” lasts only 75 minutes. But it seems to take place in a perversely kinetic eternity, a twilight time when life seems to be moving both way too fast and too slow.

Walsh, a Tony winner for the book of the musical “Once,” belongs to that essential school of Irish storytellers whose characters find the epic in the everyday, and the monstrous in the mundane. Works like his “Misterman,” “The Walworth Farce” and “Ballyturk” (which receives its U.S. premiere at St. Ann’s Warehouse later this month) are shaped by their characters’ compellingly deluded visions.

In “Disco Pigs,” this perspective is a folie à deux, the shared and sustained creation of a lad and lass who grew up together from infancy in a soul-sapping council estate in County Cork. Their personal mythology begins with an account of emerging from their mothers’ wombs on the same day, in the same hospital.

Improbably enough, these births are given specific physical life here, as Lynch and Campbell tear through the back wall of Richard Kent’s bleak and battered-looking set. It is a barren world into which these infants, born Sinead and Darren, emerge.

But as the self-re-christened Runt (Lynch) and Pig (Campbell), they turn dreary Park City (or Pork City, as they pronounce it) into a kingdom in which they reign supreme. They speak in their own invented porcine language. And they reach the heady stride of their adolescence as a pair of marauding, hard-drinking hedonists for whom a night on the town is a dangerous collision course.

It is two such nights — beginning with a movable celebration of their 17th birthdays — that particularly concern “Disco Pigs.” The script follows Pig and Runt’s paths of destruction through shops, pubs and clubs — where they steal, guzzle, dance and beat up on fellow townsfolk; into their bedrooms, where they are mesmerized by reruns of “Baywatch”; onto an empty beach, where their thoughts turn to the adulthoods that await them; and into a palatial discothèque that would appear to be the embodiment of their most cherished dreams.

And by furtive degrees, you become conscious of their nagging, growing awareness that their private realm of anarchy is beginning to dissolve. So is the symbiotic bond that has protected them from the bleakness of their lives.

The hallucinatory, Joycean night-town through which Pig and Runt roam is effectively conjured by Giles Thomas’ dense sensory soundscape, with lighting to match by Elliot Griggs. But it’s the hyper-physical performances (Naomi Said’s movement direction is key) that define not only a completely detailed environment as Pig and Runt see it, but also the reality beyond it. Watch Campbell’s Pig rush through the gamut of an entire alphabet of disco moves, in a trance of self-infatuation that fades into the realization that everyone around him is laughing at him. Observe how Lynch’s Runt withdraws in betrayed, surprised disgust when her soul mate’s customary roughhousing turns erotic.

These segues feel even more affecting than they did when I first saw this production at Trafalgar Studios in London this summer. It helps, of course, to see “Disco Pigs” more than once to fully understand its dense, vernacular poetry, which abounds in thickly Gaelic neologisms and more classic obscenities.

Here is Pig on tripping the light fan-frigging-tastic at the disco: “Beat beat through da veins full a drink! Ah pig he wee wee full a drink! Dis is sex in step to dat beautiful soun dat deep down thru me pump da danceflower.”

In print, that may look as impenetrable as a passage from “Finnegans Wake.” But when such descriptions are recited by Campbell and Lynch, you know — and feel — exactly what they mean.