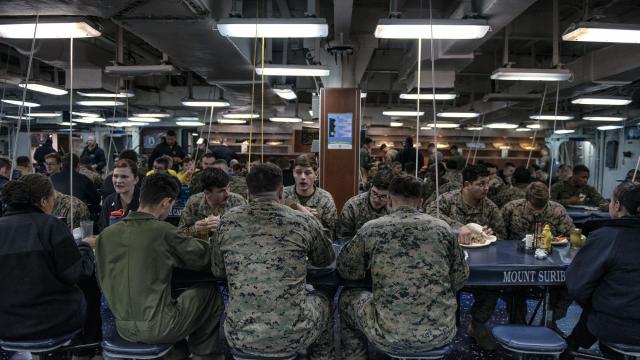 ABOARD THE USS IWO JIMA, on the Norwegian Sea — Among hundreds of Marines boarding amphibious assault vehicles this week to get from the frigid sea to the frigid beach, Lance Cpl. Jacob Boutte was armed with a secret weapon: black Merino woolen long johns.

They were not part of the Marine Corps’ standard kit during 17 years of deployments to the warmer climes of Iraq, Syria, Djibouti and southern Afghanistan. So as he prepared to embark this week on one of the North Atlantic Treaty Organization’s largest exercises since the end of the Cold War, Boutte turned to allies for help.

“I talked to the Norwegians about what they use,” he said.

“We haven’t fought in the cold in a long time,” echoed Sgt. Juan Carlos Banda, a platoon leader with the 24th Marine Expeditionary Unit, which is based at Camp Lejeune in North Carolina.

Hovering over the Trident Juncture exercise in Norway and among the roughly 15,000 U.S. troops — most of them Marines — who are participating, is a consuming narrative about the alliance’s next possible war.

The next, more immediate adversary is closer to northern Europe: Russia.

The country’s president, Vladimir Putin, has made no secret of his distaste for the Atlantic alliance’s encroachment into territory he considers part of his sphere of influence — particularly in the Baltics and in the Balkans.

And since Moscow seized Crimea from Ukraine in 2014, Western officials have worried that NATO states could be next.

Warfare in northern Europe is entirely different. It requires attention to small details, like carrying cold-weather lubricant for machine guns, as well as to seismic decisions, like moving thousands of men and women, and their heavy machinery and weapons, across fields packed with snow — something U.S. troops have not had to worry much about for more than a half-century. The Americans here are among 50,000 allied troops participating in the Trident Juncture exercise, which is based in Trondheim, Norway. The official line from there, according toLt. Col. Ben Sakrisson, is that the war game is “entirely defensive in nature.”

In an email to reporters before the exercise began, Sakrisson said Trident Juncture was “focused on ensuring the continued freedom and liberty of our allies’ nations, and partners, and their citizens.”

“The strongest deterrent against any adversary encroaching on our nations’ territories is a credible and well-practiced collective defensive capability,” he said.

Unprovoked, the Atlantic alliance does not plan to attack Russia. Still, Eastern European members of the group worry that Putin will, at some point, challenge its collective defense compact, which holds that an attack on one ally is an attack on all.

This year, President Donald Trump questioned the compact, putting the Atlantic alliance on the spot and potentially weakening its backbone.

The premise of the 2018 Trident Juncture exercise is that Norway has been invaded by hostile “South Forces.” For the purpose of the war game, the enemy invaders are being played mostly by Italian, German, Dutch and British troops.

Coming to the rescue are the “North Forces” representing NATO — U.S. Marines and brigades of soldiers from Norway, Sweden and Canada.

Last month, only days after Hurricane Florence tore through much of the Southeast, the Marines and 1,500 members of the Navy left Norfolk, Virginia, aboard the amphibious assault ship USS Iwo Jima. They weathered choppy seas and frigid winds for 10 days on the Atlantic Ocean before arriving in Reykjavik, Iceland.

The Marines aboard the ship had prepared to practice an attack in Reykjavik before the Trident Juncture exercise in Norway, but had to cancel.

“Sea conditions were too rough,” Adm. James G. Foggo III, the head of the Allied Joint Force Command based in Naples, Italy, said Monday in an interview. “It’s an exercise, not a war, and we decided to hold off because we didn’t want to swamp the vehicles.” The exercise began on Monday, and it stretched over two days. It saw Marines pour from large hovercrafts that had moved troops and vehicles from the Iwo Jima, off the coast of Norway, and onto a beach. Once on land, they scaled steep hills and rumbled along roads, heading south, toward advancing enemy forces played by Italians.

The war game will continue through Nov. 7, and will include mock assaults on Norwegian towns and a ski resort. The drills will involve clandestine water crossings and battles — although, thankfully for residents, not with live gunfire.

It is the largest iteration of the Trident Juncture exercise since 1991, when the Cold War ended. The 50,000 troops — from all 29 NATO member states, plus Finland and Sweden — arrived within the past 30 days, with 65 ships, 250 warplanes and more than 10,000 vehicles.

Officials said the alliance wants to display its ability to mount a full-scale response to an invasion of an ally from multiple locations within 30 days.

Russia has certainly taken note, as Moscow has sent official observers to watch the exercise. U.S. officials said Russians had also rented farms in the Norwegian countryside for some unauthorized snooping on the alliance’s military tactics.

And Russian officials said they know the exercise is aimed at them.

“All this talk from NATO about Russia not being the target of Trident Juncture doesn’t hold water,” Lt. Gen. Valery Zaparenko, a former deputy chief of the Russian general staff, told RT, Moscow’s government-funded television station. “Even if NATO says otherwise, Trident Juncture is really preparation for a large-scale armed conflict in regions bordering with the Russian Federation.” Officials with the Atlantic alliance said that Russia has nothing to worry about — so long as Moscow does not get aggressive with alliance members. The speed with which it moved troops and war-fighting equipment to Norway from 29 countries, Foggo said, “sends a message to Russians, or anybody else that might want to encroach on the sovereignty of any of our members.”

In the mock invasion of Norway, Italian troops largely led the multinational armored brigade. Germany’s 232nd Mountain Infantry Battalion thundered in by train. And tiny Montenegro sent a platoon, even after being disparaged by Trump in July as having “very aggressive people” who could “get aggressive, and congratulations, you’re in World War III.”

None, however, packed quite the effect of the U.S. Marines, who flung themselves at the Norwegian beaches from the water, in imitation of D-Day.

But for all the show of force, the troops have been running into trouble with the cold weather.

Two Italian soldiers ended up with hypothermia on Sunday after spending the night in below-freezing temperatures.

Capt. Joseph O’Brien, the commanding officer of the Iwo Jima, found himself suddenly tending to the heaters on his ship — just back from five months off the coast of Djibouti — to ensure they still worked.

And Cpl. Jeremy Seabridge, a Marine rifleman, said he was focused on making sure his troops changed their socks regularly to prevent trench foot, caused by prolonged exposure to the cold.

“A lot of them are from southern states,” said Cpl. Derek Hussinger, a machine-gunner. On Friday, from just below Iwo Jima’s flight deck, Col. Eric D. Cloutier, the commanding officer of the 24th Marine Expeditionary Unit, surveyed the impressive array of amphibious vehicles ready to pour out of his ship.

Hot or cold, he said, his Marines would get the job done.

But, he added, “I do worry how our equipment and personnel will do” with acclimating to “the high north.”