‘Brexodus’ of Workers Has British Employers Scrambling to Fill Jobs 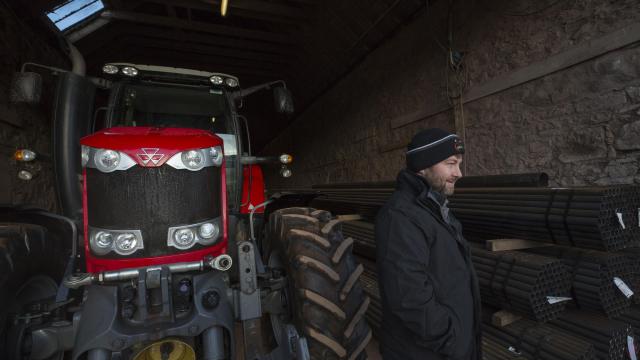 FORDOUN, Scotland — The first inkling that Ross Mitchell knew something had gone awry was when a busload of Bulgarians he had hired to pick blueberries last month failed to appear.

The way he saw it, they had been “hijacked.”

The real explanation was rather more prosaic but no more palatable: During a one-night stopover in Birmingham, a city on the way to Mitchell’s farm in northern Scotland, the 30 Bulgarians were lured by a factory offering more attractive wages. They never made it to their original destination.

The diversion of his workforce meant that Mitchell, a fruit supplier for a major supermarket chain in Britain, lost 50 tons of fruit worth half a million pounds ($680,000) in a matter of weeks.

Mitchell is not alone in his distress. Similar anecdotes have been reported by a wide range of employers, notably the National Health Service and the hospitality sector. It is a phenomenon tied to Britain’s decision last year to leave the European Union, a process known as Brexit. Since then, thousands of Europeans have already left Britain or have decided not to return, causing a significant drop in migration to the country. Net migration in the year ending in June fell by 106,000, about a third, the government said, “the largest fall in any 12-month period since records began in 1964.”

Hospitals are struggling to hire doctors and nurses. British universities are failing to attract foreign academics and students. Bankers are looking for jobs in Germany and France. The construction sector last month warned that British infrastructure faced “severe setbacks” if Britain did not train enough workers to stem a shortfall in laborers from EU countries. About half of all construction workers in London and the South East are foreign-born.

The “Brexodus,” as it is called, is being felt particularly acutely in the agriculture industry, which relies heavily on manual laborers, especially from poor European countries like Romania and Bulgaria. While Europe is experiencing a boom in “disposable” workers who are sent to all corners of the Continent, many appear to be shunning Britain.

In Mitchell’s case, the signs started appearing in the autumn after the June 2016 referendum on Brexit. This spring, the number of returning laborers started dropping.

“There were no-shows, people started changing their minds,” he said. “Guys who’ve worked five, six years with us started saying, ‘We’re not returning.’ It all came to a head in late summer and autumn. The workload was getting stretched, and we literally could not replace and recruit.”

“It was really difficult,” Mitchell, 36, said stoically, sitting in his kitchen with his arms crossed. He paused to reflect on the coming year, letting out a brief sigh as the sky outside prepared to unleash a downpour. “The big thing that’s on everybody’s mind is the labor shortage.”

Across Britain, fruit farmers like Mitchell are already scrambling to recruit and retain workers ahead of next spring, when the competition for an ever-shrinking pool of labor will be at its fiercest.

British agriculture experienced a labor shortfall of between 13 percent and 29 percent on a monthly basis from May to September, according to the National Farmers Union. John Hardman, director at Hops Labour Solutions, a supplier of temporary workers, said that labor fell by as much as 40 percent during the peak season between April and September compared with the same period last year. Industry officials and experts expect the shortage to be worse next year.

Farmers are doing everything to persuade workers from the rest of Europe to come work for them: better wages and conditions — in some cases, as high as 15 pounds ($20) an hour — English lessons, even access to tennis courts and movie theaters. Still, recruiting has been difficult. Businesses “are trying to make it easy and as pleasant as possible for people to come to work in the U.K.,” said Jack Ward, chief executive of the British Growers Association. “Despite that, people are staying away.”

Marion Regan, a farmer in southern Kent whose strawberries sell out during the Wimbledon tennis tournament, said: “We have seen fewer people applying and fewer people being able to return, and more people canceling at the last minute. That makes it more uncertain to plan ahead.”

In Britain, the Brexit vote focused on immigration, and supporters of the exit option complained that workers, especially from EU member states like Romania and Bulgaria, were stealing jobs from born-and-bred Britons. The debates around the 2016 referendum were dominated by divisive issues of race, religion and tolerance. Brexit supporters, for example, said that continued membership exposed Britain to a new wave of Muslim immigration and made it more vulnerable to Islamist radicals.

The Brexit campaign was supported by some right-wing and nationalist groups, and the vote gave rise to concerns that minorities and immigrants would be more vulnerable to hate crimes, which reached record levels this year, according to the Home Office.

The “Brexodus” has been compounded by a fall in the value of the pound against the euro. For migrants from Bulgaria and Romania, the weaker currency has made the journey to Britain less worthwhile; there are similar jobs closer to home, in Germany and the Netherlands, for example. Given that other EU countries are also struggling to hire fruit pickers, the competition to hire young, able-bodied workers has become even more intense.

The laborers who now come to Britain tend to be older and less skilled, according to farmers, who say hiring British workers is nearly impossible. “It’s disappointing that you can’t recruit U.K. nationals,” said Hardman of Hops, the agency that recruits seasonal laborers. “It’s not attractive for them. They find it beneath them.” Recruitment of British workers is also difficult, industry officials say, because unemployment is already low in farming regions, particularly in the south, and local residents are unwilling to move across the country for a job that does not offer long-term prospects.

The labor shortage is likely to worsen next year if the uncertainty over negotiations with other EU members continues and no government action is taken to fill in the vacuum, many farmers and industry officials say. Britain typically employs about 80,000 seasonal workers every year, more than 90 percent of them non-British Europeans, according to industry figures.

There are worries that the production of fresh produce could eventually shift to major competitors in the Netherlands, Poland and Ireland, or that supermarkets will increasingly turn to imports.

Farmers interviewed for this article said that they were already raising wholesale prices as a result of increased labor costs, even though supermarkets have so far managed to keep retail prices unchanged.

“It is a very, very big impact,” Alison Capper, chair of the NFU’s horticulture board, said of the labor shortage. “The whole industry is like that.”

Capper owns an orchard in the Midlands that produces Gala apples.

This year, she had 20 percent fewer workers than usual, she said. That translated to at one point about 35 tons of apples going unpicked until they could be used only to make juice, which is less lucrative than apples for consumption.

“If the apple starts to go overripe, the skin starts to get greasy and it’s not salable,” Capper said. “We were struggling to stay ahead of the apples’ ripening, so that the last 100 bins ended up being sent” to juice makers. “This has been the biggest challenge for generations.”

The industry is calling on the government to reintroduce a seasonal workers’ program that was scrapped in 2013 by Theresa May, Britain’s current prime minister who was then leading the Home Office and in charge of immigration. That program, which is run elsewhere in the European Union, allowed non-European migrants to work in Britain on fixed contracts and schedules. Crucially, the pickers were committed to doing the job.

But the British government stopped the program around the same time that the European Union accepted Romania and Bulgaria into the regional bloc. The assumption at the time, farmers say, was that workers from those countries would replace the non-European laborers.

They did — until Britain voted for Brexit.

Now, because of the bloc’s principle of freedom of movement, the Bulgarians that Mitchell had recruited were free to choose whichever jobs paid best, even those unrelated to farming.

The government has so far rejected calls to reintroduce the seasonal workers program. In a statement, the Home Office said the government did not intend to operate migration schemes for non-European citizens “while employers have access to unrestricted access to labor from elsewhere in the European Union.”

“We do not believe that there is sufficient evidence to justify the introduction of a seasonal agricultural workers scheme this year but we will keep this position under careful, ongoing review,” it added.

For Mitchell, the Scottish farmer, the issue is urgent and no longer limited to agriculture but to the entire economy. Everyone, he said, is fighting for the same labor pool.

“It’s like the Wild West,” he said. “It’s the survival of the fittest.”