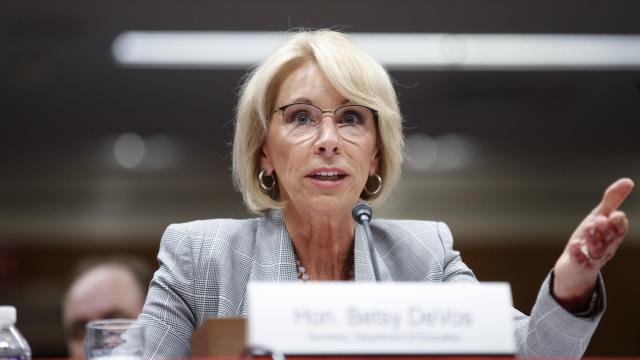 A “brain-performance” business backed by Education Secretary Betsy DeVos has agreed to stop advertising success rates for children and adults suffering from maladies such as attention deficit disorder, depression and autism after a review found the company could not support the outcomes it was promoting.

The company, Neurocore, which has received more than $5 million from DeVos and her husband, Richard DeVos Jr., to run “brain performance centers” in Michigan and Florida, lost an appeal before an advertising-industry review board, which found that the company’s claims of curbing and curing a range of afflictions without medication were based on mixed research and unscientific internal studies.

The National Advertising Review Board, an oversight arm of the advertising industry’s self-regulatory body, announced its decision last week.

Neurocore came under scrutiny during DeVos’ confirmation process, when she valued her stake in it at $5 million to $25 million. DeVos and her husband were chief investors, and she served on the company’s board of directors for seven years, until her nomination. The New York Times found that the company’s claims of treating disorders for more than 10,000 adults through “proven neurofeedback therapy” had been challenged by medical experts and insurance companies.

After being nominated for education secretary, DeVos resigned from the board, but in an agreement with the Office of Government Ethics, retained her financial interest in Neurocore. The investment raised ethical concerns for DeVos after the company expressed hope that it could expand and help improve performance for students in schools.

DeVos said she would “not participate personally and substantially in any particular matter” concerning the company. But her family has continued to invest. Among the representatives of the company before the National Advertising Review Board was Jason Mahar, the in-house counsel for Windquest Group, the investment management firm of DeVos’ husband. Windquest also continues to promote the company on its website as part of its “corporate family.”

Greg McNeilly, a spokesman for the DeVos family, said the company was “another example of them being engaged in helping people.”

“They have a very innovative mindset, so they are always looking for ways to do things better, no matter what the sector or market is,” he said.

But the company’s claims of success continue to draw scrutiny. The advertising watchdog panel found that Neurocore did not have sufficient evidence to support a claim that 90 percent of its patients reported fewer symptoms of attention deficit hyperactivity disorder following treatments, and that 85 percent experienced “clinically important reduction of symptoms.” Testimonials that the Neurocore program helped patients control anxiety and depression without medication “conveyed strong messages that were not reasonably supported by the record,” the panel wrote.

The June 4 decision affirmed a finding announced in August by the advertising industry’s investigative arm, the National Advertising Division, that a slew of Neurocore statistics and testimonials on improving migraines, sleeplessness and ADHD were based on evidence that was “insufficiently reliable to substantiate the strong health-related advertising claims.”

The company based many of its claims on assessments of patients before and after they completed 30 45-minute sessions watching a movie while connected to brain-wave mapping technology, which detects when a subject get distracted and then stops the movie. The therapy claims to help retrain the brain to “stop spiking out of range.” The company advertised that through its treatments, patients “learn to breathe deeper and slower,” resulting in better brain and heart function.

“While the panel recognizes that Neurocore’s internal studies are relevant to the outcome claims discussed below, the panel does not believe that these studies constitute competent and reliable scientific evidence establishing the efficacy of neurofeedback in treating a wide variety of disorders,” the appeals panel wrote in its decision.

Neurocore said it would comply with the recommendations to halt its advertisements, though it would still share its outcomes.

In an interview, the company’s chief executive officer, Mark Murrison, said that the company had “great respect” for the panel, and that recommendations to improve its advertisements were “a win for everybody.”

Murrison said the company believed in its results but was “evolving.” He noted that although the panel did not challenge the accuracy of its results, the company had already discontinued some claims, such as a “25 percent reduction in reported symptoms on the autism evaluation checklists.”

“We believe in our outcomes and will present them in a way that is accurate and in a way that’s compliant with the decision,” he said. “We are proud we’re able to provide a nondrug option, and anytime you are bringing innovation into a new industry, you’ll be challenged by those who only know the status quo.”

Neurocore has boasted in promotional materials that “81 percent of children who come to us on ADHD meds and complete our program are able to reduce or eliminate their use of medications upon program completion,” and that more that 70 percent of its patients achieved “nonclinical status” for anxiety and depressive symptoms.

The appeals panel took particular issue with the company basing its claims of success on internal studies gleaned from surveys of its patients. From these assessments, the company claimed “clinically important” reductions in symptoms, and that patients no longer met “symptomatic thresholds.”

The panel believed that such claims were misleading, because they gave the impression that the reduction in symptoms was clinically determined. It said the internal studies were “observational,” “not controlled” and “potentially influenced by experimental bias.” The panel wrote that its decision did not preclude Neurocore from discussing or promoting its assessment data, as long as officials did not imply that patients experienced a significant reduction in symptoms or were cured. It also recommended that the program make clear that patients who take medication for conditions consult with their doctor before discontinuing.

Murrison said that Neurocore still believed in the accuracy of its results, and that the company had had no consumer or competitor complaints.

“What’s really important to us is that everybody who comes to us for help leave better than when they came,” he said.