‘Bootleg Toys’ Are Their Own Kind of Collectibles 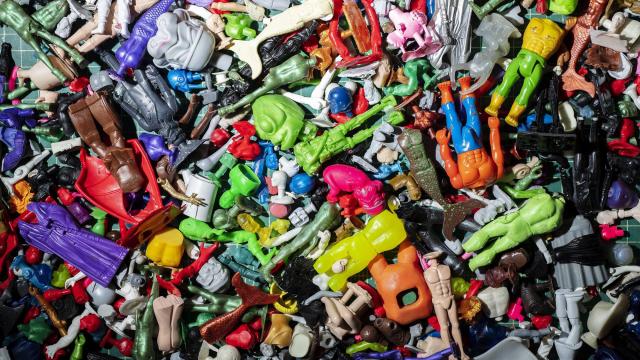 What toys do you wish you had growing up?

That question spurred a creative awakening for Aaron Moreno, when it was posed to him by his 8-year-old son.

It was 2013, and the two were developing a shared language around action figures. Moreno had collected them as a child, and his son was doing the same. For Moreno, now 37, it brought back memories of G.I. Joe soldiers, plastic Master of the Universe barbarians and “Star Wars” figurines.

They were the usual 1980s-baby staples, but, reminiscing with his son, Moreno thought of all the characters in comic books and horror movies that he was much more drawn to and would have loved to collect as toys, if only they had existed.

For the next three years, Moreno made dozens of series of resin figures based on the obsessions of his youth, re-envisioning merchandise for cult movies, like “Critters” (1986), which is about volleyball-size aliens with spiky hair and a taste for flesh, and “Creepshow” (1982), a compendium of short horror stories, featuring celluloid nightmares about cockroach infestations and invasive alien vegetation.

Moreno encased each of his figurines in packaging designed by Gabriel Hernandez, an illustrator friend, and sold them online in runs of up to 50. Often, they would be gone in minutes.

Moreno is one of several creators in whose hands the action figure has gone artisanal. What was once the dominion of large toy companies has, in recent years, become a medium for independent artists who mold, cast and package plastic and resin collectibles — sometimes using repurposed parts of other toys — to celebrate the niche obsessions of their youth.

Fans pay $50 or more for these figures, which often channel brash 1980s aesthetics and a mutable sense of nostalgia.

“With a lot of the guys who collect and do this, it’s all deeply rooted in their childhoods,” said Peter Goral, 33, who started making artisanal action figures around 2007 and said he now lives comfortably on the income they generate. His most popular figure to date, the Phantom Starkiller cosmic ghoul warrior, was also recently released in a limited edition by Super7, a designer toy company.

Goral’s company, Killer Bootlegs, in Rockford, Illinois, is so named because the pieces frequently recall the unpolished aesthetic of unlicensed action figures made abroad in the ‘70s and ‘80s; those “bootleg toys” have since become collector items themselves.

And there is something inherently bootleg about the medium. Artisanal action figures are usually molded and painted by hand but are also frequently made up of repurposed parts. (The term “kitbashing,” which refers to reusing parts from multiple model-building kits to create contraptions, is thrown around a lot in this field.)

And appropriation is a distinct part of the appeal — the more esoteric the reference, the better. The pseudomerchandising of the figures, including the blister packs they come in, is part of the allure of the toy.

“I always say it’s like graffiti for wimps,” said David Healey, 41, whose Quackula figurines (duck Draculas) are made with Howard the Duck heads and hand-sculpted feet, hair and ears. “We’re not really risking anything, but it’s the same kind of strutting our stuff.”

Ask anyone in the field, and you’ll hear that the godfather of this world is Morgan Phillips, 49, a New York artist who goes by the name Sucklord. Phillips designed his first toy in 2004 after failing to break into the toy industry. It’s a villain and alter ego called Sucklord 66 that was modeled from a “Star Wars” bounty hunter Boba Fett toy, cast in resin in a silicone mold.

Hundreds of other appropriative figurines have followed, including Christopher Walken action figures (specifically, Walken in “True Romance” and “A View to a Kill”); anthropomorphized cockroaches (packaged with an homage to Raid insect killer); and hot pink storm troopers (for his Gay Empire series).

Phillips generally creates molds for his toys using parts of other figures, augmented with his own hand-sculpted accents. His work is known in the art world as well; a custom “Star Wars” AT-AT he created was sold through Christie’s for $1,250, and his work is shown at galleries around the United States and abroad.

“I’m just stealing things,” Phillips said. “I want to inflict some sort of confusion on people and set myself up as a sort of contrarian to the rest of the toy industry.”

Spencer Pollard, 33, makes a line called Dogman Toys that includes some figurines inspired by the black Bart Simpson character that appeared on fan-made “The Simpsons” merchandise in the late 1980s and early ‘90s. “It’s a toy and it should be clean and simple,” Pollard said. “But it can also be a statement.”

Pollard, who is African-American and plays bass in the hard-core punk band Trash Talk, said black toys are underrepresented and that he always wanted a toy that he could identify with when he was growing up. The bootleg re-imagining of Bart Simpson as black spoke to him. Other bootleg toys act more like philosophical statements. The abstract renderings by Anthony Aguilar, of Super Secret Fun Club, and Dan Polydoris, of Death by Toys, question the very nature of what makes an action figure action-y.

Polydoris’ best seller, for example, is based on John Carpenter’s 1980 horror film, “The Fog.” It’s three-fourths of a cotton ball stretched out into a blister pack glued to a piece of cardboard decorated with a scene from the movie about a vengeful, killer fog in California. “It’s a joke,” Polydoris said. “It’s just garbage taped to other garbage.” He has sold almost 100 pieces of this “garbage,” for $30 a pop.

Artists routinely weave copyrighted material into their action figures, but few interviewed for this article said they had received cease-and-desist letters. Goral said Campbell’s did contact him regarding his “Star Warhol” figure, a mash-up of the “Star Wars” droid R2-D2 and a Campbell’s Soup can, so he immediately stopped selling it.

Most of the people who prop up the artisanal action figure market seem to be white men dragging their feet toward middle age. But action figures have been born of female nostalgia (and anger) as well. Amanda Visell, an artist in Los Angeles, said one of her creations was inspired by her discovery that the 12-inch Princess Leia doll manufactured by Kenner in the 1970s was packaged not with a plastic gun, which Leia uses in the original “Star Wars,” but with a comb, which she does not.

With her partner, Michelle Valigura, Visell created a resin Leia in shorts and a variety of T-shirts, one of which is emblazoned with a comb. The figurine is called Leia Is Not Your Toy.

That one was on display at New York Comic Con in October in the booth of DKE Toys, which is run by Dov Kelemer, a former toy distributor who now sells art figures from a roster of 50 to 100 artists at conventions. He said the affinity for bootlegs is the result of an “understanding gained over time,” but when people get it, they really get it. One such enthusiast is Adam Goldberg, the creator and producer of “The Goldbergs,” a sitcom. Artisanal action figures have appeared on his show, and Goldberg has an extensive personal collection, including his “holy grail”: Dead Greedy’s Beastie Droids, which are “Star Wars” robots made to look like the Beastie Boys.

“I look at them as pieces of art,” Goldberg said of the hundred or so figures he owns. “I don’t collect art. This is what I collect instead.”