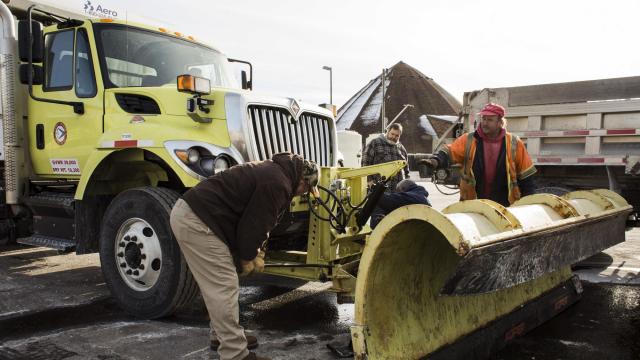 Icy water, pushed by a high tide, has flooded parts of Boston.

Boston’s Long Wharf area became a slushy mess when a 3-foot tidal surge pushed floodwaters into buildings and down the steps of the Aquarium mass transit station. Firefighters rescued one person who was trapped in a car that had water nearly to its door handles.

“This is the first time I’ve ever seen the water come this high in the downtown area,” Joseph Finn, the city’s fire commissioner, said as the wind whipped heavy snow through the air.

Finn said emergency workers had made some other rescues in coastal areas of the city, helping people out of stranded cars in the icy water, and city officials said flooding had extended to other neighborhoods, including the Seaport, Dorchester and East Boston. Meteorologists said Thursday’s tides were some of the highest ever recorded in Boston.

“We had a very high astronomical tide to begin with, and we’re looking basically at a 3-foot storm surge on top of that,” said Hayden Frank, a meteorologist with the Weather Service’s office in Taunton, Massachusetts. “To get significant coastal flooding, you need to have the strongest winds at exactly the time of high tide, and that’s kind of what happened today.”

Boston Common was almost silent as it began to fill with snow early Thursday, cloaked in a white haze interrupted only by the odd spray of Christmas lights or a solitary silhouette walking through the park.

Bitalina Diaz, 38, rode the Orange Line toward her job cleaning offices in downtown Boston, with her pants tucked into her boots and her hood up to buffer the effects of the chilly wind.

As of early Thursday evening, parts of Boston got more than a foot of snow, according to the National Weather Service.

Tourists frolic in cold, and on the Reflecting Pool, in Washington.

By Thursday afternoon, the black pavement on Pennsylvania Avenue was dulled under a thick layer of salt. A few blocks south on the National Mall, the American flags beside the World War II Memorial whipped in the wind as resolute tourists explored the monuments.

“Our kids have never really seen snow before,” said John Weir of Miami, who was traveling with his wife, Sylvia, and their three children. All five were bundled and masked, exposing only their eyes.

Jordan Papa, from Auckland, New Zealand, slid around on the frozen Reflecting Pool with his partner, Jayda Tainui, as the couple bantered that they had heard the ice crack beneath them.

“You see this pool in movies, and we just wanted to be able to say we’ve walked on it,” Tainui said.

A Mainer says it is a nice day for a run.

In Maine, where the Weather Service had issued a warning for hurricane-force winds along the coast, residents were taking the harsh wintry conditions in stride.

Mish Sommers, 46, who lives in Lincolnville, Maine, went for a run Thursday in whiteout conditions with ice cleats on her shoes. “Probably should have run in snowshoes,” she said.

She said she loved being part of the stillness outdoors. “What happens when the snow falls with this kind of intensity, it gets so quiet,” she said. “There’s a very hushed sense of everything being so gentle around us.”

Cooper Funk, 38, a vegetable farmer in Camden, Maine, who is a fifth-generation Californian, said he was worried about the wind, which was roaring around his house at more than 40 mph, though the greenhouse-like structures over his vegetables were still standing.

Those iguanas falling from trees in Florida? They probably aren’t dead.

When temperatures dip into the 30s and 40s, Floridians know to be on the lookout for reptiles stunned — but not necessarily killed — by the cold. They can come back to life again when it warms up.

In Boca Raton, Frank Cerabino, a Palm Beach Post columnist familiar with the creatures, stepped outside and saw a bright green specimen by his pool on Thursday morning, feet up.

“He didn’t move,” Cerabino said. “But he’s probably still alive. My experience is that they take a while to die.”

In the end, the iguana lived.