'Bohemian Rhapsody' delivers a good time, not a ball 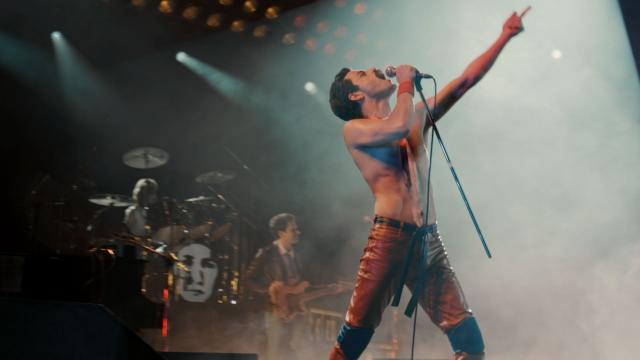 (CNN) — Rami Malek leaves it all on the stage in "Bohemian Rhapsody," a generally conventional biopic devoted to Freddie Mercury and Queen that captures the electricity of their music, without lending much new to the "A Star is Born"-esque elements of the drama. That aforementioned fictional film somewhat magnifies this fact-based one's limitations, but Malek's magnetic performance and the songs make for a worthwhile Queen tribute, if not a killer.

Introduced handling baggage at the airport, Freddie (his adopted name as the son of Indian immigrants) yearns for a life of stardom, and quickly offers his services to a local band playing college gigs. His pronounced teeth, he explains, give him extraordinary range, although simply as a practical matter, they take a little getting used to in terms of Malek modeling them.

Freddie also rapidly enters into a romance with Mary Austin (Lucy Boynton), with whom he's extraordinarily happy, at least at first. But the band's rapid ascent brings with it considerable temptation, and the dawning realization that he's gay -- something Mary knew, at least as depicted here, even before he did.

Made with the cooperation of Mercury's former bandmates Brian May and Roger Taylor (who produced the music), "Bohemian Rhapsody" opens with the traditional 20th Century Fox fanfare being played on an electric guitar, which is a way-cool idea. Alas, director Bryan Singer has trouble bringing much innovation to the proceedings thereafter, somewhat episodically moving from one creative breakthrough to the next.

That produces some amusing moments, such as the negative reaction that the group receives when they seek to expand the rock palette with "Bohemian Rhapsody," prompting pushback from EMI Records chief Ray Foster (an unrecognizable Mike Myers), who insists that no radio station would play a six-minute single filled with nonsense words and meaningless phrases.

Written by Anthony McCarten (a veteran of the biographical "Darkest Hour" and "The Theory of Everything"), the movie fares less well tackling the interpersonal dynamics, and the corrosive influence of manager Paul Prenter ("Downton Abbey's" Allen Leech) -- damaging Freddie's relationship with the band and those close to him, despite his insistence that they're a family, whatever squabbles they might have.

It's also hard to avoid clichés in the depiction of Freddie's free-wheeling, hard-partying lifestyle. The rock-star-level excesses are surely abundant, but feel slightly sanitized in how they're presented, perhaps in pursuit of a less-restrictive PG-13 rating. If so, that seems misguided, given that the movie will likely skew to an audience old enough to remember singing along with "Don't Stop Me Now" at the time.

What that leaves, mainly, is Malek, and the "Mr. Robot" star goes beyond just an effective impersonation of Mercury's flamboyant stage antics -- although there's plenty of that -- to a richer, more intimate portrayal. When Freddie says, "I'm exactly the person I was meant to be" early on as his success grows, it's tempered by the realization that he died too young, a victim of the AIDS epidemic yet to come.

Taken strictly on its terms, "Bohemian Rhapsody" is a credible exercise in nostalgia, if not an especially inspired one. Viewed through that narrow prism, those who can name all the tunes ought to have a good time, if not, as the song goes, a ball.