‘Be More Chill’ Is Heading to Broadway, Fueled by Social Media 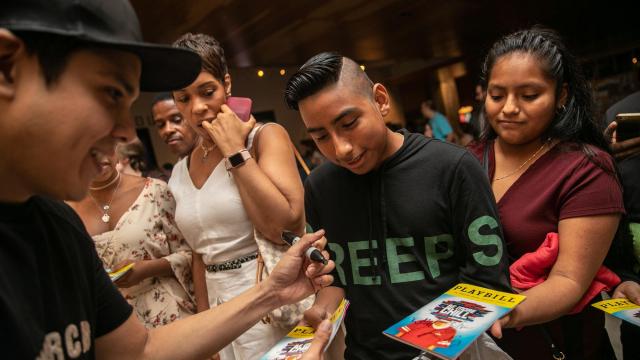 NEW YORK — “Be More Chill,” an energetic sci-fi musical set in the anxious halls of a high school, is coming to Broadway, propelled not by a presold megabrand or raves from critics, but a surge of social media.

Producers are betting that Broadway, increasingly dominated by movie adaptations, jukebox musicals and plays starring celebrities, has room for a no-name show whose early evangelists have been adolescents converted to fandom by streaming the cast album online.

Encouraged by the success of a current off-Broadway production, which sold out its run before the first performance, the producers announced Wednesday that they would open on Broadway in March at the 900-seat Lyceum Theater. The show, directed by Stephen Brackett, features a pop-rock score by Joe Iconis and a book by Joe Tracz.

“I’ve never ridden a horse like this,” said lead producer Jerry Goehring, a college theater administrator whose only previous Broadway outing was the six-week run of “A Christmas Story: The Musical” in 2012.

Broadway is a risky business — about three-quarters of all productions fail, and many a show with a strong tail wind has crashed. But angsty adolescents are hot these days, as evidenced by “Dear Evan Hansen,” “Mean Girls” and even “Harry Potter and the Cursed Child.” Goehring said he had raised the “Be More Chill” capitalization costs — up to $9.5 million, according to a filing with the Securities and Exchange Commission — in just a few days.

“Be More Chill,” adapted from a young-adult novel by Ned Vizzini, is about a high school student who seeks to boost his popularity by swallowing a Japanese pill that turns out to be a computer chip that functions as a de facto life coach.

The central characters, as in much popular culture about high school, are teenagers who feel socially ill-at-ease, and the universality of that experience appears to account for much of the show’s popularity. Its breakout song, “Michael in the Bathroom,” is about a boy who feels so marginalized that he shuts himself away during a Halloween party.

“Even though the story is pretty nuts and there is this crazy sci-fi element, it really is a celebration of misfits and geeks and people who feel like they don’t quite belong, and actual young people relate to the characters,” said Iconis, who wrote the show’s music and lyrics.

Iconis, a favorite on the city’s cabaret scene, enjoyed a flash of success writing songs for the television series “Smash,” but has yet to have a commercially successful musical, and “Be More Chill” will be his Broadway debut. (His most popular song, by the way, is titled “Broadway, Here I Come!” but it’s darker than that title might suggest.)

“Be More Chill” had a production in 2015 at New Jersey’s Two River Theater, which commissioned the show, but after an unenthusiastic New York Times review, Iconis thought its journey was over.

“It just kind of fizzled there — the audiences were loving it so much, but we didn’t get the review that a show like that needs to have a life, and we didn’t have a commercial producer or a famous person attached, so I felt like that was the end, and it was a huge bummer,” he said.

But then Two River and Ghostlight Records agreed to make a cast album. The release, in the fall of 2015, was unremarkable. Yet in 2017, the creative team and stars began getting an unusual number of Twitter notifications and Instagram tags for no apparent reason.

Tracz, the book writer, said people even started emailing him to ask questions about the characters.

“We started to see these fanimatic, homegrown videos of ‘Michael in the Bathroom,’ and these Tumblr and Reddit pages were getting a lot of traction, and the streaming numbers were going up substantially,” said Kurt Deutsch, the founder and president of Ghostlight Records, using the word “fanimatic” to describe animated storyboards created by fans. “It was completely organic — we don’t have tons of marketing dollars to make this happen. It just grew to become a viral sensation.”

The cast album, discovered and shared online, has now been streamed more than 170 million times worldwide, making it among the most streamed theatrical cast albums.

Goehring, the director of the theater arts program at Sacred Heart University in Connecticut, had not seen the Two River production and was unaware of the show’s growing online fan base, but he was an admirer of Iconis’ work and decided to direct a college version of the show. When fans started to fly in to see it, he snapped up the commercial rights.

That, in turn, led to this summer’s off-Broadway production, in a rented theater at the Pershing Square Signature Center, which runs until Sept. 30. Again, The Times review was unenthusiastic, but the crowds have been raucous. Most days, 1,500 people enter a digital lottery for two to four last-minute seats, and a one-week extension sold out in six hours.

Among those who saw the show this summer: Robert Wankel, the president of the Shubert Organization, which then offered the producers the Lyceum on Broadway. Wankel said he had been struck by the youthfulness of the show’s fan base, a sharp difference from the usual Broadway audience.

“This has truly been created by social media, which is fantastic,” he said. “Social media these days, I don’t have to tell you, can make or break something, and in this particular case, they’re loving it.”

So now the show’s creative team is discussing tweaks as they prepare for what they are thinking of as “Be More Chill: 3.0” — Broadway.

“The fact that we’ve gotten here because actual human beings love the show is truly remarkable,” Iconis said. “It gives me faith.”