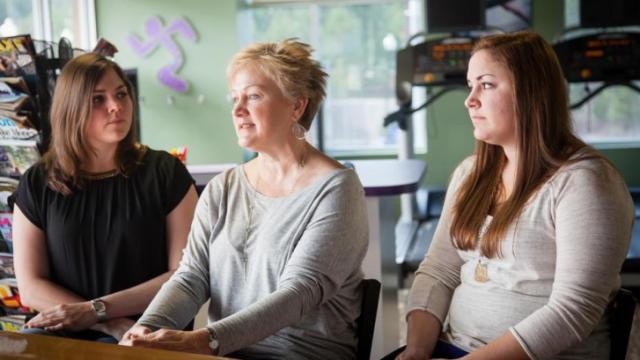 Merrie Gough and her two daughters helped save his life.

Gough, her 25-year-old daughter Danielle and 22-year-old Elisabeth said it was an 'act of God' that led them to Anytime Fitness on Rogers Road in Wake Forest instead of looking at new homes.

It was at the gym where Ruiz, 56, a field engineer for Kodak Alaris, was working out prior to heading to church. He started feeling ill while on the treadmill. Ruiz felt better a few minutes later and returned to working out.

And then he dropped to the floor.

Gough, a certified registered nurse anesthetist, and her two daughters were walking into the gym when Ruiz went into cardiac arrest.

Another person inside the gym found an Automated External Defibrillator, which was also used on Ruiz.

“The patient would have been in big trouble without being shocked,” said Wake County Paramedic Damon Thomas. ”The AED most likely played a big role in saving his life. The mother and daughters who sprang into action were the true heroes that day. They knew what to do and took charge. I can’t praise them enough.”

Wake Forest firefighters were first to arrive and took over CPR. Ruiz, who was transported to the hospital, later had an aortic valve replaced.

Having a heart attack changed his life.

“Now I see things differently,” Ruiz said. “What used to bother me doesn’t bother me anymore. I feel like there’s a destiny. That I was saved and spared for a reason and now I have to find in my journey what my purpose is in surviving.”