'American Idiot' star: 'It is like being shot out of a cannon'

"American Idiot" is more than just a stage production set to the music of alternative punk band Green Day. It is a rock opera about three friends coming to terms with growing up and trying to find their place in a post 9/11 world.

Nicci Claspell, who plays an Army nurse who treats one of the men in the production, said the show is very physically demanding – eight shows a week, including two on most weekend days.

"After the first week of shows, there was so much excitement that I lost my voice a little bit," Claspell said during a phone interview Thursday from Boston, where the show is in the middle of a six-night engagement.

Since then, Claspell has focused on staying hydrated, doing vocal warm-ups and not pushing her voice too hard. 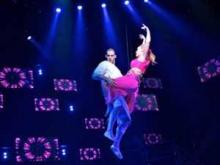 One of the show's highlights is an aerial ballet Claspell's character, known as The Extraordinary Girl, does during one of the main character's morphine-induced dreams.

"That is one of my favorite moments to actually be apart of," Claspell said.

Another highlight, Claspell said, is the ensemble performance of one of Green Day's most popular songs, "Wake Me Up When September Ends."

"It kind of is supposed to be around Sept. 11, but it doesn't throw it in your face. It gives the visual idea of it," she said. "It is beautifully sung and choreographed. It is really moving."

"Our audiences are a great spectrum of people," she said.

Green Day fans will be happy to know that the band was instrumental in developing the production. Lead singer Billie Joe Armstong helped co-write the show. It isn't merely a show written just to include their music.

Claspell credits music supervisor Tom Kitt with bringing out the emotions of the songs. "It is beautiful and it balances really great with the punk rock angsty vibe," she said.

Another element worth noting: The 90-minute show has no intermission.

"It is like being shot out of a cannon," Caspell said.