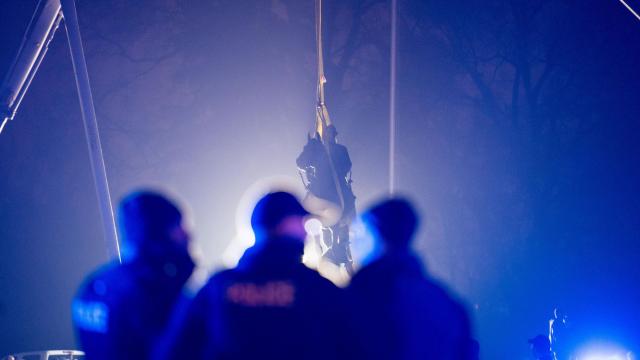 MEMPHIS, Tenn. — Charlene Harmon and her fiancé, Victor Bryant, walked Thursday through a small park overlooking the Mississippi River, pleased by the view — and what it did not include.

“I feel a sense of relief,” said Harmon, 63, a retired nurse. “Finally, we can come down and really enjoy this park. And we don’t have to see something that reminds us of our painful past: the lynchings, and beatings, and the selling of our forefathers.”

A towering monument to Jefferson Davis, the president of the Confederacy, was removed from Memphis Park on Wednesday night, along with an even bigger equestrian statue of Nathan Bedford Forrest, a Confederate general and first grand wizard of the Ku Klux Klan, from a second park. Convinced that the statues needed to come down, city leaders circumvented a state law preventing their removal by selling the parkland to a nonprofit group — a creative solution that Republican leaders of the Tennessee House branded as potentially illegal.

“We are governed by the rule of law here in Tennessee, and these actions are a clear infringement of this principle and set a dangerous precedent,” Rep. Glen Casada, the majority leader, and Rep. Ryan Williams, the Republican caucus chairman, said in a joint statement.

Members of the Sons of Confederate Veterans were equally upset and have repeatedly threatened legal action. But much of Memphis, a city that is 64 percent black, saw the removals as essential as the city gears up to commemorate the 50th anniversary of the April 1968 assassination of the Rev. Martin Luther King Jr. at a downtown motel.

The assassination is without question the ugliest mark in Memphis’ modern history and provides an emotionally fragile historical context to the battle over whether to take down Confederate symbols. The massacre of nine black churchgoers by a white supremacist in Charleston, South Carolina, in 2015 prompted a national call for such symbols to be removed, and they have come down in cities across the country, including Baltimore, Columbia, South Carolina, and New Orleans. Some in Memphis had demanded for decades that its Confederate symbols be removed, but the Charleston killings set in motion the current push.

In Memphis, King’s assassination at the hand of James Earl Ray, a white racist, has exacerbated black resentment and white flight, while hindering economic development and wounding the collective psyche.

Few, if any, Memphians believe that this week’s editing of the public symbols will heal all of the city’s wounds or solve some of its most difficult problems, including a high crime rate, struggling public schools and a child poverty rate of nearly 45 percent.

But there is some hope that the removals have provided some momentum. There is also some satisfaction that the city was able to get rid of at least one nagging, painful problem. Jim Strickland, who in 2015 was elected as the city’s first white mayor in nearly a quarter-century, spoke Thursday about a “unified effort” that “stands in start contrast to what happened in 1968,” when King was fatally shot.

“We know we did the right thing,” Strickland said. “I just think this is a big step in the momentum that we’ve already got.”

The City Council, made up of six black and three white members, voted unanimously to sell the parkland to a nonprofit entity that quickly removed the monuments. The Chamber of Commerce had issued a statement supporting the removal in August. A racially diverse grass-roots coalition, led by activist Tami Sawyer, pressured the city to act with persistent, and occasionally disruptive, demonstrations.

Sawyer, 35, a director of Teach for America who is running for a county commissioner seat, said that many residents were still struggling to find the path to reconciliation.

“I think there’s a lot of people that are trying in Memphis to bridge this racial divide,” she said. “But I think that we have to have honest conversations about why that divide exists. Too often people want to say, ‘Let’s get to the healing,’ but not call out the years of systemic oppression that continue to exist.”

And so the city finds itself hurtling toward the April 4 anniversary, with everyone, it seems, measuring the distance between past pain and real progress, and wondering what the future might bring. Otis Sanford, a newspaper columnist and journalism professor at the University of Memphis, has written often about the sins of the city’s past and the challenges in its future. On Thursday, he sounded positive notes, saying that many statue supporters seemed to come from outside the city, and that, inside the city limits, a new, more tolerant generation was helping steer Memphis in new directions.

“From a racial standpoint, we’re at a much better place now than we’ve ever been, and that’s saying a lot when you’ve got racial divisions and political divisions around the country,” he said.

The commemoration of the anniversary of King’s death began earlier this year. It will culminate the week of April 4 with events at the National Civil Rights Museum, housed in the old Lorraine Motel where King was killed, and around the city. The convention and visitors bureau has been advertising the commemorations online, alongside suggestions on where to find the best blues joints, soul food, hotels and barbecue.

For locals, the question is whether the city can maintain some semblance of unity. Both Sawyer and the Rev. Earle J. Fisher, an activist and pastor at Abyssinian Baptist Church, have criticized the mayor for failing to give the activists enough credit for the statue removals.

It seemed, Sawyer said, like an effort “to erase the fact that a woman stood at the front of this.” Strickland responded that he mentioned “demonstrators” generally, although not by name. Some bitterness remains, and some simply have other priorities: A flurry of Twitter users complained Wednesday that the local CBS affiliate pre-empted the season finale of “Survivor” to cover the statue removals.

The Republican House leaders, who plan to start a formal investigation into the statue removals, criticized the city for selling the parkland — and the statues — to a nonprofit group, Memphis Greenspace, thus allowing it, and not the city government, to haul away the statues. Among other things, the lawmakers raised the possibility that open meeting laws may have been violated.

Van D. Turner Jr., the director of the nonprofit group and a Shelby County commissioner, said that the statues were in an undisclosed location and that they could be transferred to a Civil War memorial or to members of the Sons of the Confederacy.

On social media, some residents suggested this week that the 9,500-pound Forrest statue be replaced by one of Ida B. Wells, the crusading African-American journalist who was run out of Memphis for writing editorials against the lynching of three prominent black businessmen in the early 1890s.